Closing Streets to Create Space for Walking and Biking 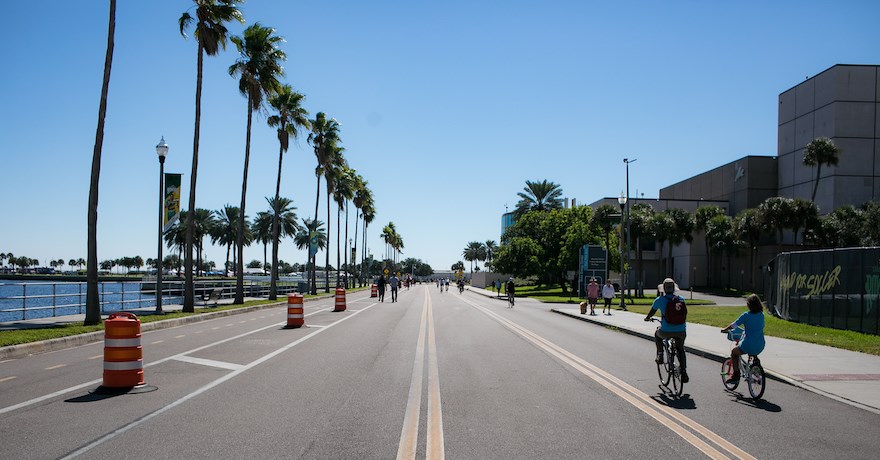 Closing Streets to Create Space for Walking and Biking

Brandi Horton serves as RTC's vice president of communications. She has dedicated her career to communicating for social change and is passionate about creating communities that promote health and well-being.

Americans are hunkering down in efforts to slow the spread of COVID-19—business, social and cultural hubs have closed; cities and states are under “shelter-in-place” orders; schools are closed indefinitely in many parts of the country.

Just how hunkered down we are can be seen in new data from the traffic analytics firm INRIX. Nationwide, traffic dropped 30% at the end of last weekcompared to the same weekday as the month prior. In some places, the decline in vehicle miles traveled was as much as 50%.

In that same timeframe, trail use surged. An analysis of 31 trail counters for the week of March 16–22 by Rails-to-Trails Conservancy (RTC) found a nationwide trail usage increase of nearly 200% from that same week in 2019. Largely, this is good news. Because of the way the virus spreads, medical and health experts agree that being active outside is crucial to maintaining well-being—as long as we keep a safe social distance. But surging demand for trails and outdoor places is making it increasingly difficult for people to keep 6 feet of space between each other.

During this time of extreme social distancing, much of the local guidance includes outdoor exercise as essential, and many public health experts are reinforcing the importance of being physically active. Although there are some indications that restrictions on activities may be increased in the coming days in COVID-19 hot spots like New York and San Francisco, areas with “shelter-in-place” orders are continuing to indicate that outdoor physical activity, like walking, running, wheelchair use and walking pets, is essential.

With other places where people typically exercise closed, like gyms and sports complexes, and as trails have become critical transportation routes in places where transit use has declined due to COVID-19 concerns, the pressure on the nation’s trail system has been significant. Trail managers are taking fast actionto help mitigate the spread of COVID-19 among their constituents while encouraging careful and conscientious trail use. To ensure that people are adhering to social distancing and being safe in the outdoors, some trails and parks are closing, while others are limiting their facilities and services.

Find a Local Trail on TrailLink

Download the free TrailLink app on iPhone or Android.

RTC’s trail-finder website and app, TrailLink.com, is free for anyone to use. The service offers information for more than 37,000 miles of multiuse trails nationwide, including trail maps, walking and biking directions to get to the trail, and contact information for local trail management organizations. As people are looking for places to get outside and be physically active close to home, TrailLink.com is a reliable resource.

Many communities don’t have outdoor facilities equipped to handle the surge in use, especially as trails and parks close and limit access. For example, typical sidewalks, especially those in denser communities, are not wide enough to allow for six feet of social distancing.

“We're seeing that in the wake of this horrible crisis, access to the outdoors is rising to the forefront as one of our core human needs. Living with social distancing and self-quarantining means that getting outside is one of the few respites most people have right now,” said Liz Thorstensen, RTC’s vice president of trail development.

Thorstensen notes that not everyone has easy access to a trail or a safe street to walk on, and even those who do are finding these places extremely overcrowded, especially in more densely populated regions of the country.

In Pennsylvania, trails have become overwhelmed with bicyclists, pedestrians and runners, leading the City of Philadelphia to look for new solutions to help ensure safe physical activity outside. This includes the closure of Martin Luther King Jr. Drive, one of its two river drives, due to overcrowding on the Schuylkill River Trail—enough so that appropriate social distancing was nearly impossible.

“We found that bicycling had quadrupled over the same time period the year before. Closing MLK Drive was a relatively straightforward move for city officials to make because it is regularly closed during summer weekends and could be done by simply closing a few gates,” said Sarah Clark Stuart, executive director of the Greater Philadelphia Bicycle Coalition (Bicycle Coalition), which led the successful effort calling for the closure. “The reality is, though, that it isn’t going to be enough as this pandemic stretches on. Philadelphia needs more streets and roads closed throughout the city to offer sufficient space for its entire population.”

The Bicycle Coalition is proposing even more park roads and key streets be closed to allow increased access for Philadelphians to the outdoors on infrastructure that promotes safe social distancing practices.

“Many cities already practice "open streets" and "car-free streets" on major thoroughfares as standard practice on weekends, but with the unprecedented changes we’re all living through right now, converting more streets to car-free zones seven days per week could profoundly change the quality of life for millions of Americans,” said Thorstensen.

In response to challenges many communities are facing to preserve open space amidst overcrowding, particularly in dense, urban communities, RTC sees an opportunity to call for nationwide action—closing select streets to car traffic, creating more safe places to walk and bike during the pandemic, and essentially delivering a trail to every community in America.

Sign the Petition to Close Streets for Walking and Biking

In New York, the state hardest hit by the pandemic and one of the most densely populated cities in the United States, calls to shut down streets are coming from the top. At a recent press conference, Gov. Andrew Cuomo called on the city to make a plan to close streets to cars to make room for people walking and biking. In Washington, D.C., advocates are calling for closures of select streets to make room for safe walking and biking in the city, pointing to those that extend or are adjacent to existing trails as a priority because they create more seamless active-transportation networks.

In Bogotá, Colombia, city officials have established temporary bikeways, adding dozens of miles of bike-first infrastructure throughout the city as a means of discouraging public transportation and reducing the spread of the virus. The expanded bikeways utilize the city’s well-established La Ciclovía route, which has provided car-free roads every Sunday since 1974 and has inspired dozens of other open streets around the world. Officials in the United States and in many cities internationally are seeing the opportunities that this rapid change in transportation and infrastructure use could bring, encouraging more adoption of active transportation and more support for bicycle and pedestrian infrastructure in the long term.

Creating Active Transportation Infrastructure in a Moment of Extreme Need

Something else that’s surged since the nation began practicing extreme social distancing: traffic speeds. INRIX reports that average traffic speeds have increased significantly—by as much as 60% in some places. With speed and proximity to traffic being one reason why many don’t feel comfortable walking and biking, it’s another factor underscoring the challenges that communities face as they encourage people to be physically active during this time of social distancing, but struggle to provide the space for them to do so.

“One trend that’s been occurring over the past few weeks is an uptick in speeding and reckless driving from having fewer cars on the road. This tells me it’s more important than ever to provide safe outdoor corridors, free from vehicle traffic, for people to access for recreation and transportation. Beyond the short-term benefits, if done thoughtfully, this could have profound impacts for active transportation and recreational connectivity well after the pandemic wanes,” said Thorstensen.

We hope you’re finding some solace and beauty in Philly parks at this time. Here’s a photo of beautiful magnolia trees 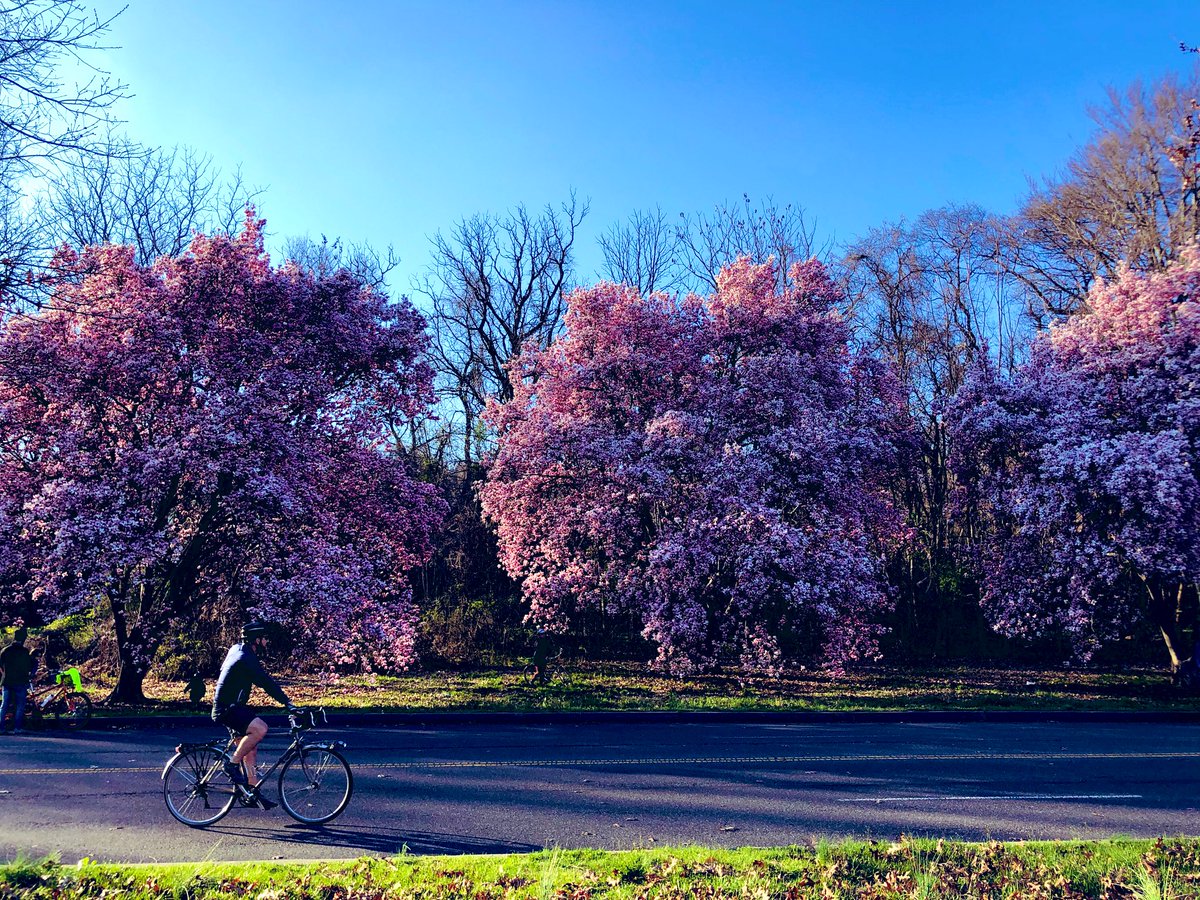 16 people are talking about this

Trails are fundamental infrastructure for resilient communities. In a recent post by the Institute for Development and Transportation Policy (IDTP), the organization underscores the need for multimodal strategies to keep transportation accessible and moving in times of disruption, pointing to walking and micromobility (bicycling and scooters, for example) as important parts of every city’s resilience plan. IDTP’s statement is calling on cities to respond to mounting global public health, climate and safety challenges by building infrastructure for and making streets that accommodate walking, biking and micromobility.

“In many cases, communities are finding their trails to be overloaded and insufficiently sized to meet the demand, which highlights why connected trails and on-road infrastructure such as high-quality bike lanes and sidewalks are so valuable and worth public investment. Now that the world has experienced a future scenario play out in real time, it is time to make a modest investment to be better prepared for the future when connected bicycle-pedestrian networks are more necessary than ever,” said Clark Stuart.

“We have a profound opportunity in this moment to convert some of our roads into protected spaces—essentially bringing trails to every neighborhood in America, creating critically important places for people to safely walk and bike, giving more people safe access to being outside right now while being able to practice social distancing. We know that the demand is there and that people are craving the space; we only need to decide that it’s important enough to make it happen,” said Thorstensen.

“Infrastructure for biking and walking provides so much resiliency to communities that need it both in times of crisis and normalcy,” said Clark Stuart.